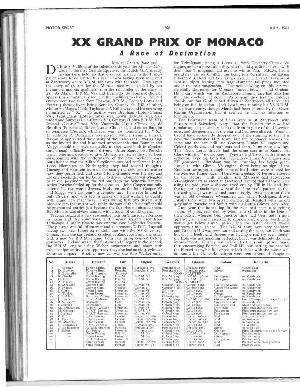 Due to a shuffling of the calendar this year the Monaco G.P. was not the first Grande Epreuve, the Dutch G.P. already having been held, so that everyone arrived in the Principality ready to do battle, this year's form having been indicated at Zandvoort, where B.R.M. ran away with the race. Once again the entry of 16 cars for the Monaco race was decided by ten invitations and six qualifiers from the remainder of the entry of 23. As Marsh (B.R.M. V8) and Businello (de Tomaso) did not appear this automatically reduced the qualifiers to eleven. Invited entries were two each from Porsche, B.R.M., Cooper, Lotus and Ferrari ; these drivers being Bonnier, Gurney, G. Hill, Ginther, McLaren, Maggs, Clark, Taylor and P. Hill, the second Ferrari being nominated as "X". To qualify were Brabham (Lotus-Climax V8), Trintignant (Lotus-Climax V8), Lewis (B.R.M. V8), Salvadori and Surtees (Lola-Climax V8), Gregory (Lotus-B.R.M. V8), Ireland (Lotus-Climax V8), Vaccarella (Lotus-Climax 4), de Beaufort (Porsche 4), Siffert (Lotus-Climax 4), and either Banditti or Mairesse (Ferrari), whichever was not nominated for "X". In addition R. Rodriguez was present with a training Ferrari. As can be appreciated the quality of the "also rans" was as high as the invited list and it seemed unreasonable that Bonnier and Maggs should not have to qualify as they were both in obsolete cars, though officially works drivers. After Zandvoort, Porsche went home and decided to give Monaco a miss, as they had been disappointed with the performance of the new 8-cylinder cars, but after the way the 2-litre 8-cylinder cars had performed in the 1,000 kilometres at Nurburgring they had second thoughts. Gurney and Hanstein were all for racing the new cars no matter how they performed, and after a long struggle won the day and got one 8-cylinder car for Gurney to drive. Bonnier was relegated to an old 4-cylinder car, the red one from the Scuderia Venezia, which Porsche fettled-up for the occasion. John Cooper naturally entered his two works drivers, McLaren on the lone Cooper V8 and Maggs with last year's 4-cylinder car. In a race limited to only 16 cars, and with such a galaxy of talent waiting to qualify with brand new machinery, it was wrong that two drivers with obsolete cars that might well get in the way of the fast stuff should be guaranteed entries just because the factories nominated them. But Monaco was always tainted with a touch of comic-opera.