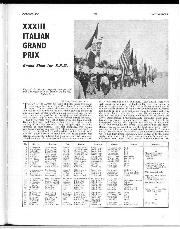 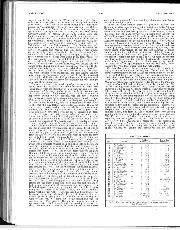 This year the Automobile Club of Milan made two major changes to the Italian Grand Prix, both of them admirable ones. The first was to abandon the concrete banked track and hold the Grand Prix on the road circuit only and the second was to increase the race length to almost 500 kilometres. A total of 31 cars was accepted for the qualifying sessions, of which 22 were to form the grid, these being the fastest during practice.

The Ferrari team were out in force, with Phil Hill, Baghetti, Bandini, Rodriguez and Mairesse but they had nothing new in the way of cars, the best effort being the lightweight car which appeared at Nurburgring. The rest comprised two normal 120-degree-engined cars, one old 65-degree-engined car, and the interim 1962 model with central gearbox that Phil Hill drove at Aintree. There were three brand new cars at the factory with rear suspension like a Lotus but a major error had been committed in copying the geometry and there was not time to correct it, so these cars had to be left behind. The B.R.M. team were well prepared, with cars for Graham Hill and Ginther and a third car as spare, and they all arrived at Monza early and got in some unofficial practice the day before the meeting began, Ferrari also having spent a lot of time going round the circuit earlier in the week. Porsche also had three cars, Gurney on the newest one, and they had an interesting modification to the cooling-fan drive, incorporating a thermostatically controlled clutch-cum-freewheel so that at maximum speed the drive to the fan could be disengaged, leaving the impeller windmilling at maximum r.p.m. and saving all the power losses involved in the drive. Bonnier was on the second car and the third was a spare. Other attempts at achieving more speed could be seen in "streamlining" reminiscent of Brooklands in the nineteen-twenties; the wheels had flush-fitting aluminium discs bolted on to the fixing studs, fairings were fitted over suspension members and rear wishbones were taped over to present a smooth surface. In order to check float levels the Weber carburetters were fitted with small external glass riser-tubes which clearly indicated the petrol level. Team Lotus were endeavouring to get both their drivers in "monocoque" Type 25 cars, Clark in his Oulton Park winning car and Taylor in the newest one, but they had a space-frame Type 24 with them as spare, all three cars having Coventry-Climax V8 engines. The R. R. C. Walker Team had built a brand new Lotus 24 with Climax V8 engine and 6-speed Colotti gearbox, and this car they had loaned to SSS Venezia for Vaccarella to drive, while the original Walker car, which has been completely rebuilt twice this season, was being driven by Trintignant under the Walker colours. The Cooper team had their usual two cars, with Climax V8 engines and their usual two drivers, McLaren and Maggs, but John Cooper was absent due to his father being seriously ill. McLaren's car was fitted with oversize fuel tanks alongside the cockpit, making the car more bulbous, and both cars were using 15-in. front wheels for this fast circuit. U.D.T.-Laystall had three pale green Lotus cars, a pair with Climax V8 engines and one with B.R.M. V8 engine, all with 5-speed Colotti gearboxes, and Ireland had the choice of the Climax-engined cars while Gregory had the B.R.M.engined one, this being the team's original one. Bowmaker had all three Lola-Climax V8 cars, Surtees having the latest one, with stronger front suspension, the cars having pannier tanks alongside the cockpit as a safeguard for the increased race length, while they also had provision for fitting knock-off rear hubs should practice prove the necessity for tyre changes in a race of 500 kilometres.