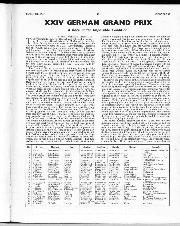 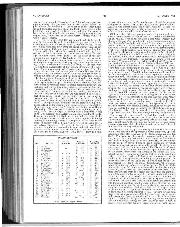 A race under impossible conditions

The Automobile Club von Deutschland collected a vast entry for the German Grand Prix at the Nürburgring, including all the factory teams and nearly all the private-owners, the only notable exception being the U.D.T.-Laystall team. It seemed that the A.v.D. did not want to know about Mr. Ken Gregory and his pale green cars, but they would have liked his drivers, Ireland and Masten Gregory. The Grand Prix scene is certainly still full of interest for at this meeting there were three brand new designs of Grand Prix car, as described elsewhere in this issue. These were the new Ferrari, which was lighter and lower, the new Brabham car, designed by Ron Tauranac and Jack Brabham, and the new Gilby-B.R.M. designed by Len Terry and built by Gilby Engineering.

The Scuderia Ferrari were out in full force, having partially recovered from strikes, newshounds and story-tellers, or possibly because Enzo Ferrari likes the Nürburgring and can talk business with the Germans. They had four cars and four drivers, the leader, Phil Hill, having the car he raced at Aintree with the 6-speed gearbox ahead of the rear axle and the clutch behind it. Baghetti had a very ordinary car with 120-degree engine unit, as used in earlier races this year, and Rodriguez had an even earlier model with 65-degree V6 engine, which was in fact a 1961 car. When he heard he was to drive this old model he was none too pleased, which may have accounted for his subsequent brilliant performances which completely spoilt any technical statistics. The fourth driver was Bandini and he was given the brand new car, making its first appearance. Next on the list came the two Team Lotus entries of Clark with the Lotus 25 and Taylor with the Lotus 24, as raced at Aintree. Gurney and Bonnier were in the flat-8-cylinder Porsches, Gurney having the newest one, while there was a third car as spare. The Cooper team of McLaren and Maggs had the two Climax V8 Cooper cars, and they had C. T. Atkins' 4-cylinder car with them as a spare. B.R.M. had the three cars they had at Aintree, the spare one being the latest one that had only been used for practice previously, and Graham Hill and Ginther were the drivers. The Lola team also had their three cars entered by Bowmaker, Surtees having the choice of the brand new one that practised at Aintree or the one he'd been using all season, while Salvadori was keeping to his usual car. The new Lola had been fitted with a 5-speed Colotti gearbox in place of its original 6-speed, as there was enough to do to sort out the new chassis without having the complication of a new gearbox as well. Jack Brabham at last made a public appearance with the long awaited Brabham-Climax V8, which is described in detail elsewhere, and he was using a 6-speed Colotti gearbox. The Rob Walker team had yet again completely rebuilt their Lotus 24 with Climax V8 engine, using a new chassis and suspension after the Rouen crash, and Trintignant was once more trying his luck. The Dutchman de Beaufort had had his Porsche painted a smart orange at long last, as well as having its usual mechanical overhaul after each race, and Lewis had his Cooper-Climax 4-cylinder now looking a bit "used." The Swiss Ecurie Filipinetti entered three runners, these being Siffert with their 4-cylinder Lotus-Climax, Heinz Schiller with their new Lotus-B.R.M. V8 car, and hill-climb expert Heini Walter in Schiller's 4-cylinder Porsche. The S.S.S. Venezia team had one entry, this being Vacmrella with their 4-cylinder Porsche, and Keith Greene had his new Gilby-B.R.M. V8 with 6-speed Colotti gearbox, described in detail elsewhere. The rest of the field comprised Burgess with the Anglo-American team Cooper-Climax 4-cylinder, Bianchi with the Maserati-engined E.N.B., Chamberlain with his old Lotus 18, Shelly with Dalton's Lotus 18, Collomb with his ex-Surtees Cooper-Climax 4-cylinder and Seidel with his Lotus-B.R.M. V8. There was one non-starter for practice, this being A. E. Marsh whose B.R.M. V8 is still not raceworthy, but that is a long story.