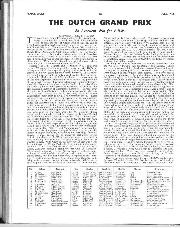 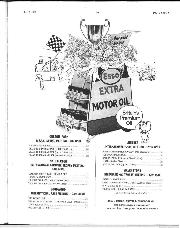 An excellent win for BRM.

The 1962 Dutch Grand Prix was notable for three outstanding things, it was the first round in the World Championship series, it took the title of Grand Prix of Europe, and it assembled a wealth of technical interest not seen for many a year at a Grand Prix race. The cream of the Grand Prix world were present, as well as some of the sour milk, whose presence only the Dutch Royal Automobile Club could justify. All the leading teams were entered, but serious private owners with first-class machinery, such as Lewis and Marsh with their V8 BRMs, were turned down in favour of inexperienced or second-rate drivers in obsolete cars. With the field limited to 20 cars this was entirely unjustified, and should be acted upon by the FIA.

Ferrari sent Hill, Baghetti and Rodriguez with 120-degree engined V6 cars, ostensibly as used last year, but with Hill's car having a modified rear suspension giving a wider track, while the gearbox had a new casing for the 6-speed internals. The 4-valve-per-cylinder engine and centrally placed gearbox have yet to be completed. All three cars had dispensed with the transverse struts on the rear suspension, previously used to prevent any possibility of rear-wheel steering.