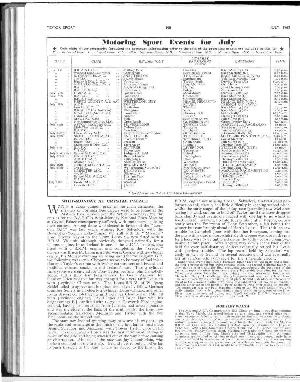 With a 2,000 guineas prize as the main attraction, the majority of Formula One drivers were to be found at the Mallory Park Circuit over the Whitsun holiday, and the entries for the B.A.R.C.'s Whit-Monday National Open Meeting at Crystal Palace consequently suffered, with most teams splitting their entries. Among those who elected in favour of the "London G.P." was last year's winner, Roy Salvadori, with the Bowmaker-Yeoman Lola-Climax V8, still with its "Monaco" nose, Trevor Taylor in the Team Lotus 24, now fitted with a B.R.M. V8 unit, although obviously designed primarily for a Climax engine, Innes Ireland in one of the U.D.T. Lotuses, also fitted with a B.R.M. engine, and completing the "seeded" drivers was Bruce McLaren in a 1961 works Cooper with 4-cylinder engine, his Monaco-winning V8 being saved for the Belgium G.P. the following week-end. Cheshunt seems to be wary of fuel injection and Taylor's car ran with Weber carburetters and brazed and modified exhaust stacks, as did Ireland's car.

Two 4-cylinder Emerysons were entered for Tony Settember and John Campbell-Jones, and a third had been entered by Gerry Ashmore for Graham Eden to drive but was changed for a very tatty Lotus 18 with 4-cylinder Climax unit. The Lotus-B.R.M. of Wolfgang Seidel failed to appear and his place was taken by fellow German Gunther Seifert in an elderly 4-cylinder Lotus-Climax, and other Lotus drivers completing the grid were Jay Chamberlain (Mk. 18 with 4-cylinder engine), David Piper and Brian Hart with his bright orange F.J. car fitted with 1,475-c.c. Cosworth-Ford engine. Ireland, having just returned from Canada, had missed practice and was therefore at the back of the grid, whilst the front row accommodated Salvadori, McLaren and Taylor with the two Emerysons on the second row.