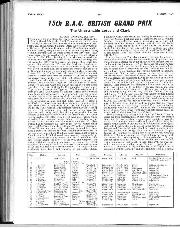 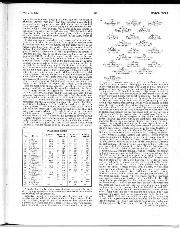 The Uncatchable Lotus and Clark

In spite of a lot of protests the R.A.C. once again delegated the British Grand Prix to the B.A.R.C., the second time in succession, so that the Grand Prix circus had to journey to Liverpool to race at the Aintree Stadium. After the victories by Cooper at Reims and Porsche at Rouen, as well as Porsche at the smaller Solitude meeting, everyone went to Aintree in a very keen frame of mind, knowing that the whole situation was very open. The Italian strikes having eased a bit, the Scuderia Ferrari fielded a lone car for Phil Hill, this being the one tried out in practice at Monaco, with the gearbox ahead of the differential housing, but still using the 1961-type 120-degree V6 engine, their other two entries being withdrawn. The two flat 8-cylinder Porsches for Gurney and Bonnier were as raced at Solitude, except that they were now both using Koni shock-absorbers, whereas one had been on Koni and the other on gas-filled Bilstein shockers previously. Graham Hill and Ginther had their usual B.R.M. V8 cars and there was a brand new spare car identical to Ginther's as regards the chassis frame at the rear, Hill's still having the prototype chassis frame with different tube arrangements to support the gearbox. McLaren and Maggs had the two identical Cooper-Climax V8 cars and Clark and Taylor had the two Team Lotus cars that they used at Solitude, Clark on the "monocoque" Type 25 and Taylor on the Type 24. The Bowmaker team had their two usual Lola-Climax V8 cars for Surtees and Salvadori and a brand new car as spare. In basic layout it was the same as the other two cars, incorporating all the successful modifications made since the start of the season, plus a few more, notably the front suspension uprights and stub axles. Instead of being a modified proprietary component the uprights were now fabricated from steel sheet in taper-tube form, like the Ferguson P99, and the stub axles were of large diameter tubing like the Lotus 24 and 25. The wishbone ends and steering pivots were also improved and strengthened, but the top suspension link has reverted to channel section as used on the original car. A 6-speed Colotti gearbox was fitted, with a right-hand gearchange which necessitated a cross-over linkage behind the gearbox as the 6-speed Colotti has the selector mechanism on the left. Rob Walker had to withdraw his entry as the car was written-off at Rouen and Brabham ran his Lotus-Climax V8 as the F.1 Brabham-Climax V8 was not quite ready. Although it could have been made a runner in time for the race it would have meant that it was completely untried and Brabham wisely decided not to use it. After Rouen the U.D.T.- Laystall team were not happy with the B.R.M.- engined car so they entered their two Lotus-Climax V8 cars, Ireland having the newest of the two, and Gregory's car having additional bracing struts across the engine bay. That completed the entry of works or semi-works teams and the rest of the field was made up of private entries. On Cooper-Climax 4-cylinders were Lewis and Burgess, on old Lotus-Climax 4-cylinders were Chamberlain and Shelly; Settember had a lone Emeryson-Climax 4-cylinder and de Beaufort had his 4-cylinder Porsche. Campbell-Jones was a non-starter as he was still suffering from his Solitude accident, and the car was badly wrecked, Greene hoped his new Gilby-B.R.M. V8 would be finished in time but it was not, and Siffert scrubbed his entry after hearing the measly starting-money offer made by the B.A.R.C. A last-minute arrival was Seidel with his brand new Lotus-B.R.M. V8.