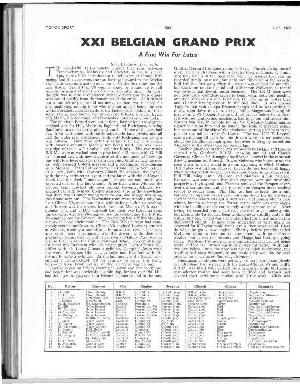 Taken from the Motor Sport Archive

The wonderful 14.1-kilometre circuit that runs between Francorchamps, Malmedy and Stavelot, in the hills near Spa, needs little introduction to followers of Grand Prix racing, and this year everyone was looking forward to the Belgian G.P. with keen anticipation as it was to be the first time that the new British Grand Prix V8 engines could be wound up to full song in top gear and kept there for a considerable time. On paper the grid was to consist of sixteen invited drivers and those others who would qualify from the remainder of the entry. As it turned out a number of people did not arrive so there was no need for any qualifying, among those who did not appear being the two works Porsches, internal strife at the factory still holding up their active racing programme, the two private B.R.M. owners, Lewis and Marsh, did not come, and Bowmaker entered only one Lola.

The Scuderia Ferrari were out in force, having four 120-degree engined cars for Hill, Mairesse, Baghetti and Rodriguez, it being Bandini's turn to sit in the pits and watch. Three of the cars had new front wishbones with easily adjustable base pivots, and all had the wider rear wishbones, while only Rodriguez was using a rear roll-bar. They were virtually as last year, the new chassis with forward-mounted gearbox not being used, nor was there any sign of the new "4-valve" cylinder heads. The two works B.R.M.s were as we had seen in practice for Monaco, with G. Hill in his usual car, with new engine after the monumental blow-up, but with low-level exhaust system now, and Ginther had the new car with 6-speed Colotti gearbox and a redesigned bell-housing since Monaco.