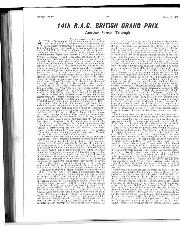 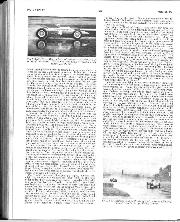 After the fast straights of the Reims circuit the Grand Prix scene moved to the slow corners of the Aintree circuit, and all the regular contestants, plus many more, entered for the British Grand Prix. The Scuderia Ferrari entered their usual team of Phil Hill, von Trips and Ginther, with the rear-engined 120-degree V6-engined cars, and at the last minute F.I.S.A. entered Giancarlo Baghetti, and Ferrari lent them the rear-engined V60-degree engined car, and looked after both it and the driver. In view of the likelihood of rain at Aintree the cars were fitted with the sealed Perspex covers over the carburetter intakes, in place of the wire-mesh ones normally used. Porsche had the same three cars they had used at Reims, which were the old trailing link suspension ones with 4-Cylinder engines on Weber carburetters, the new flat-8 still not being raceworthy, though undergoing much test-bed work. These were entered for Bonnier, Gurney and de Beaufort, the last-named being a private entry though looked after by the factory mechanics. There was little or no change among the British entries„ everyone waiting seemingly in vain for the Coventry-Climax V8 engine and in the meantime doing the best they could with the Mark II 4-cylinder. Brabham and McLaren had the usual works Cooper cars, Ireland and Clark the two new Lotus cars, with 5-speed ZF gearboxes, Graham Hill and Brooks with B.R.M.s, all with Climax engines. Moss was driving the Rob Walker Lotus-Climax as used at Reims, and Surtees and Salvadori had the Yeoman Credit Team Coopers, the former having the Yeoman Credit special Cooper as a training car, now modified still further to take a Mark II Climax engine. H.D.T.-Laystall entered their two rebodied Lotus cars for Henry Taylor and Bianchi and had one Of the cider-type Lotus cars as a training car, this being fitted with the Laystall 5-speed gearbox, now modified internally and being given a thorough testing on the practice car. Camoradi entered Masten Gregory in their Cooper and Burgess in their Lotus, and H. & L. Motors of Stroud entered Jack Lewis in his 1961 Cooper-Climax. Private entries with oldtype Lotus-Climax cars came from R. H. H. Parnell, Ashmore, Seidel and Mrs. Bryden-Brown, this last being the car Gurney has driven on occasions, only this time it was on loan to the Formula Junior driver Maggs. Marsh had his much-modified Lows-Climax and Keith Greene was entered in the Gilby-Climax, a smart-looking car built on orthodox Lotus-cum-Cooper-cum-Lola lines by Gilby Engineering. The Scuderia Centro-Sud entered Bandini with their 1961 Cooper-Maserati and Natili with the early model of similar layout.