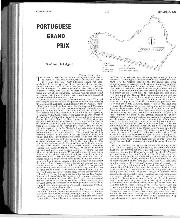 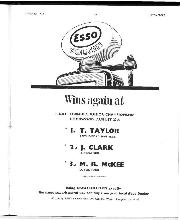 THIS year it was the turn of the Portuguese Grand Prix to go north to the town of Porto, where the race was held in 1958, and the same 7.407-kilometre circuit was used, unchanged from two years ago. I then considered it a true road-racing circuit and I still do, being fast (over 110-m.p.h. average) and containing all the hazards of a true road race, especially Portuguese roads, with hills, kerbs, tram-lines, cobbles, houses, trees, and just about everything. Anyone who has driven about in Portugal will know that the Porto circuit is just typical of normal road conditions in that country.

The entry list was very select, the Automobile Club of Portugal preferring to seed the entries on application rather than suffering the nonsense of qualification, and naturally the two works Cooper-Climax cars headed the list, driven by Brabham and McLaren. A third 1960 model has now been completed and it was there as a spare for Brabham to use. The Yeoman Credit Team had three cars, Brooks with one fitted with a Colotti five-speed gearbox, Gendebien with a Cooper four-speed gearbox and wire wheels on the rear, and Taylor with a standard Cooper, all three, of course, having the latest Climax 2½-litre engines. Stirling Moss was making a welcome return to Grand Prix racing after his crash in the Belgian Grand Prix, now being fully recovered as his injuries were not as serious as the popular Press would have us believe. He was driving R. R. C. Walker's blue rear-engined Lotus-Climax, it having been completely rebuilt and had a sensible modification on the front suspension. The anti-roll bar which is normally coupled to eye-bolts in the top wishbone pivots, and which have twice given trouble on works Lotus cars, had been re-made to be coupled to the lower wishbones by short links, thus obviating a known source of trouble in the Lotus design. The Walker team also had an old Cooper-Climax with them as a spare car and spare engine. The Lotus works entered three rear-engined cars, Clark having the one with the canted engine and enclosed carburetter, and Ireland and Surtees having the cars with the upright engines and Weber carburetters sticking out in the air stream, neither having the long intake tubes from the nose used previously. Ireland's car was fitted with the rear disc brakes mounted on the wheel hubs instead of the usual arrangement of inboard brakes, though as this was purely an experiment the inboard brakes were still there though not coupled up. The B.R.M. team were entered in full force with their rear-engined cars driven by Bonnier, Graham Hill and Gurney, and there was a fourth car as a spare. The Scuderia Ferrari entered only two cars, both Dino 246 front-engined cars, and the drivers were Phil Hill and von Trips. To complete the entry the Scudceia Centro-Sud entered two of their Cooper-Maserati cars, one having been lowered at the rear, and was driven by Gregory, and the second car was loaned to the Portuguese driver Mario Cabral, in place of Trintignant, who expected to be driving a works Aston Martin, but at the last minute no entries were forthcoming from Feltham, so Trintignant was without a drive.