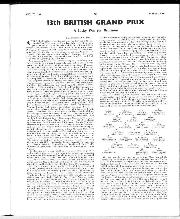 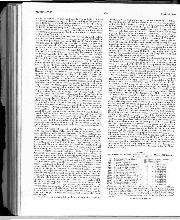 A Lucky Win for Brabham

AMID the jollifications of the fiesta of motoring that the B.R.D.C. organised at Silverstone on Saturday, July 16th, there took place the British Grand Prix, the 13th in the series, and Great Britain's contribution to the 1960 World Championship races. Presumably because most of the competitors in the G.P. were Silverstone habitues, the time for practising was not very long, and on Thursday afternoon was for a bare one hour's duration. As it came on to rain during that hour, anyone who was late off the mark had little hope of registering any useful times.

As is becoming their custom, the works Coopers were quickly away and registering good times, it being only nine weeks since they were last on the circuit, as with most of the other competitors. Brabham and MeLaren were driving the 1960 works cars from Surbiton, and they were accompanied by Reventlow in a works-entered 1959 Cooper, as his Scarabs had returned to America for further development work. B.R.M. had Bonnier, Graham Hill and Gurney, as usual, all in rear-engined cars, that of Gurney's being a brand new one and, in consequence, was receiving last-minute adjustments. The Lotus team comprised Ireland and Surtees with rear-engined cars with the long air intakes running from the nose of the car to the carburetters, and Clark with the latest car wit ft canted engine that Flockhart drove at Reims. Rather surprisingly, the Scuderia Ferrari entered only two cars, both front-engined Dino 246 models, with Phil Hill and von Trips as drivers. This was possibly due to the fact that. Silverstone is very much a " local-boys" stamping ground and with so little practice time available there would not be much hope of a newcomer to the circuit learning very much. Both cars sported fancy chromium exhaust extractors on the ends of the tail-pipes which looked as though they had been bought at the local Modena "soup-up shop." With Brooks terminating his association with Vanwall he returned to Yeoman Credit, which meant that Halford was dropped from the team, and was given a Cooper-Climax fitted with five-speed Colotti gearbox. Gendebien had a similar gearbox on his car and in addition had wire-spoke knock-off wheels on the rear. The third member of the team was Henry Taylor with a standard Cooper-Climax. The Scuderia Centro-Sud had two of their Cooper-Maseratis, for Gregory and Burgess, and Aston Martin entered two 1960 short-chassis lightened cars, for Salvadori and Trintignant. On the Thursday afternoon only one car was ready, that being the one for Salvadori, and this was interesting in that it had been fitted with an experimental independent rear suspension, utilising the same torsion-bar springing and the same gearbox/differential unit, but a short top wishbone was used in conjunction with the wide-based lower one, while an anti-roll bar was fitted. Since the car's appearance at Zandvoort the engine had been put back on Weber carburetters. The rest of the field was made up of private owners, there being Greene with the Gilby Engineering Cooper-Maserati, Fairman with C. T. Atkins' ex-works Cooper-Climax, Bianchi with Fred Tuck's ex-works Cooper-Climax, and Piper with his front-engined Lotus Climax.