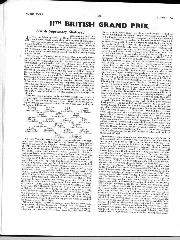 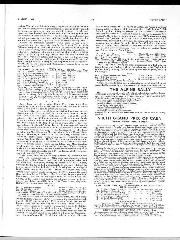 AFTER the defeat by Ferrari at Reims it seemed almost certain that Vanwall would regain their pride of place at Silverstone, their own home ground and a medium-fast circuit on which the Ferrari handling characteristics would not appear ideal. Added to this was the fact that Silverstone is not a circuit where high power and maximum speed are so important, as at Spa or Reims, while if Vanwall could not cope then it seemed that B.R.M. surely would, or even Cooper.

Practice day on Thursday looked well, for Moss was easily fastest with the number one Vanwall, clocking 1 min. 39.4 sec., a fastest-ever lap of the Buckinghamshire circuit. To add weight, Brooks was next fastest, and altogether the Vanwall team seemed to be in command of things. On Friday, the situation was the same, with Moss once more fastest, with 1 min. 39.6 sec., but surprise of the day was Schell, who recorded 1 min. 39.8 sec. with the B.R.M., using all the road and quite a lot of the grass, but having a real go nevertheless. Both Collins and Hawthorn with V6 Ferraris were trying hard but were having to work to even approach a time of 1 min. 40 sec. while to get below this was quite out of the question. The noise and fury of the two Ferraris was such that they completely eclipsed Salvadori with a 2.2-litre Cooper who was busily getting on with practice, and when the final results were announced it was seen that he had done 1 min. 40 sec., faster than either of the Maranello cars, while Allison, with a 1957 Lotus fitted with a 2.2-litre engine, was in amongst the red cars.