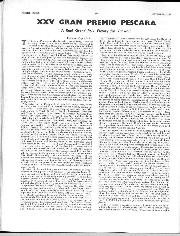 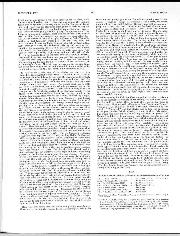 THE town of Pescara, on the Adriatic coast of Italy, is famous for many things, it is a holiday resort for the Italians, it is the point on the Mile Miglia route where the race turns inland over the Abruzzi mountains, it is the last outpost of civilisation when venturing down into Calabria by road, it is invariably very hot, but above all it has a wonderful motor-racing history. The 25 kilometre circuit, one of the longest used for Grand Prix racing, lies on the edge of the town and goes up into the mountains, through the villages of Montani and Spoltore and down again through CapeIle, to join a long fast straight which runs at right-angles to the Adriatic until it meets the Via Adriatica at the village of Montesilvano, and then it runs south down the coast road back to Pescara. The entire circuit is comprised of normal everyday Italian roads, it runs slap through villages, contains every known hazard of normal motoring, such as kerbstones, bridges, hairpins, rough surfaces and every type of bend and corner imaginable. Out in the country section the road is bordered by fields, trees, high banks, hedges, sheer drops and concrete walls; in fact, the whole thing is pure unadulterated ROAD RACING. It is the sort of road racing that is traditionally Italian, and the circuit is one of those like the Nurburgring, the Targo Florio, Naples or Dundrod, where the battle is not between driver and driver, nor even between car and car, but the battle between the combination of car and driver against natural surroundings. After driving round the Pescara circuit the fact that one driver beats all the others and wins a race, seems subsidiary to the principle task, which is to cover 18 laps of this fantastic old-time real road racing circuit.

The history of the Pescara circuit goes back many years, as far as 1924, when a certain Enzo Ferrari was the winner, driving an Alfa Romeo. Since then the Grand Prix has been connected with such names as Varzi, Nuvolari, Fagioli, Roserneyer, Caracciola and Trossi in pre-war days. Here the fabulous Mercedes-Benz versus Auto Union battles were waged, poor Guy Moll lost his life driving for the Scuderia Ferrari, Whitney Straight began a series of wins for British cars in the "Voiturette" race, that preceded the Grand Prix for the Coppa Acerbo, his win with an M.G. being followed by victories by Hamilton with an M.G. and Seaman with E.R.A. Pescara was always a great name in road racing circles and after the war it was soon back on the scene, but money was not so plentiful in that part of Italy, and the race diminished in stature, but even so the names of Ascari. Fangio and Gonzalez along with Maserati, Alfa Romeo and Ferrari carried on the traditions of this great circuit, and then when times became a bit harder sports ears took over the scene, and Bracco, Marzotto and Hawthorn added their names to the list. It seemed that Pescara and its wonderful circuit were going to drop out of the Grand Prix scene, for the trend was towards artificial road circuits, like Reims, Spa, Aintree and Silverstone, but at long last the Pescara Grand Prix has been able to reinstate itself as a major event, and to count for the Grand Prix World Championship. The mountains and villages of the Abruzzi once more have been ringing to the sound of the best Grand Prix engines of today, and just as Nuvolari and Rosemeyer pitted all their skill and the power of their cars against the local conditions, so Fangio and Moss have done the same, the local conditions changing hardly at all.