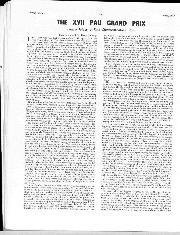 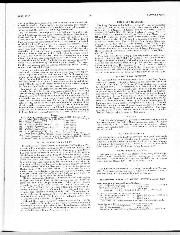 Last year was the first occasion since 1935, apart from the war years, that the Pau Grand Prix did not take place, and the reason was that the French Inspectorate of Circuits, who flapped around after the Le Mans accident, deemed the circuit unsafe. In spite of a full-length Grand Prix having been held every year without any modifications being made to the circuit, the Automobile Club Basco-Bearnais suddenly found themselves refused a permit. To the onlooker it seemed to be the end, for the Pau circuit had always been essentially a street race, and it appeared that real Grand Prix racing on the public roads was going to die for ever. Undaunted, the people of Pau raised an enormous sum of money and attacked the circuit with energy and intelligence, and the result was that a permit was allowed for 1957. The main quibble about safety was in the interests of the public, not the drivers, and all grandstands that had been in dodgy positions were removed, the enclosures of the banks of the park through which part of the circuit runs were well fenced and opposite the pits an enormous ferro-concrete stand to hold 4,000 people was built, together with concrete retaining walls along parts of the circuit. The road itself was completely re-surfaced, widened very slightly at one or two suitable points, and all the sharp kerbstones were replaced by bevelled kerbs. This work left the trace of the circuit unchanged, apart from a difference of radius on the bend by the start and the pits being positioned before the bend instead of on the apex, but it left the Pau circuit as a pure street race, with all the hazards of kerbs, lamp-posts, railings, walls, front gardens and so on. In fact, the circuit was not ruined as was feared; it was actually improved from the motor-racing point of view.