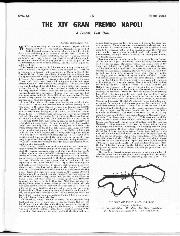 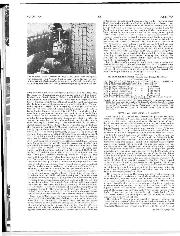 Wth races crowding on top of each other, Naples suffered from the lack of factory support from Maserati, just as Pau had lacked Ferrari support the week before, but in spite of this there were sufficient private owners to fill the field. The circuit of Posillipo, on the heights overlooking the bay of Naples, remains unchanged each year, being a pure street race, with innumerable corners and continually-changing gradients; in fact no part of the 4.1-kilometre circuit is on level ground, even the start being on an uphill gradient.

The Ferrari team was out in full force as soon as practice started, with Collins in a Lancia/Ferrari with swing-axle rear and Hawthorn in the one with Ferrari front suspension, and Musso in the 1½-litre Formula II car. It has been a bone of contention with drivers that the lap record for the Posillipo circuit remains to the credit of Ascari driving a 1953 Formula II Ferrari 2-litre, with a time of 2 min. 7.7 sec., and though many have tried to improve on this time, using current Formula 1 cars nobody had succeeded. The power/weight ratio and handling of the old 2-litre Ferrari, together with Ascari's ability, plus the fact that he was trying hard to make up time after a pit stop, resulted in freak conditions that were absolutely right for the circuit, with the resultant record time. Since then cars have had a lot more power and it has been difficult to approach Ascari's time on this twisty circuit, for the surplus of power over that required has been more than the drivers could cope with.