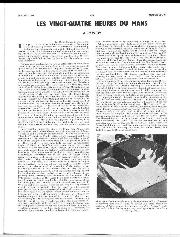 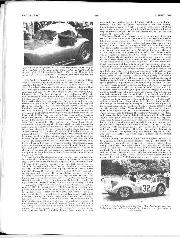 This year the Le Mans 24-hour race returned to its normal status of counting towards the Manufacturers' Championship for Sports Cars, because the Automobile Club de l'Ouest wisely decided to drop the limitations on fuel consumption and engine capacity, that they imposed last year. As a result all the important manufacturers entered strong teams of cars and fielded all the best drivers they could find, so that the line-up for this year's race was most impressive.

The race itself resolved into a furious battle between the various teams in the opening stages and then, one by one, the big stars fell by the wayside and the race was completely dominated by Jaguars, not because they had set a fast pace and caused all the opposition to break up but because they wisely sat tight and let the opposition burn itself out. The first two hours of the race were as good as any Grand Prix and the pace was fantastic, with record laps of under four minutes and speeds of over 200 k.p.h. First Collins led with a 4.1-litre Ferrari but seized up after a few minutes, then Hawthorn in a similar car continued the furious pace until a front tyre tread came off, and this let Behra take an open 4.5-litre Maserati into the lead. All the while the rest of the top drivers and cars were thundering along trying not to get left too far behind, with the result that the overall average of the race was very high. The Ecurie Ecosse Jaguars and the other private Jaguars were not up amongst this opening "sprint," but were sitting just behind it all, so that by the time 2½ hours of the race had been run and all the Italian cars had run into trouble, the Bueb/Flockhart Jaguar passed serenely into the lead and stayed there for the rest of the 24 hours, completely unassailable. As a free-for-all race the event was virtually finished by 7 p.m. on Saturday, and it was an excellent demonstration of a number of interesting things. A driver who has the flair for Grand Prix racing seldom has the ability to control himself for a 24-hour endurance run; the Italians seem to have little idea of just how long 24 hours really are; the British, and Jaguars in particular, have got the art of "racing" at Le Mans well and truly sewn up; and reliability with speed is a difficult thing to attain, even in a sports-car engine.