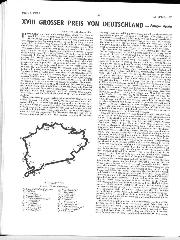 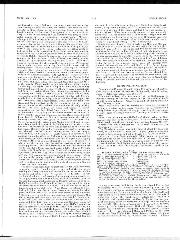 Probably the most outstanding thing about the German Grand Prix was the fact that no British cars were entered.

Not one of our Grand Prix teams made an entry which was not only surprising, but depressing as well. It was left to Italy, the real home of Grand Prix racing, to make up the bulk of the runners for one of the toughest events in the World Championship series. The Nürburgring itself is sufficient test to prove a sound car, but to race round it for 22 laps calls for terrific stamina from the drivers. Ferrari entered a full team of five Lancia/Ferraris, driven by Fangio, Collins, Castellotti, de Portago and Musso, the last-named making his first re-entry into racing since his crash in the 1,000-kilometre race back in May. All the cars were the now standard type, with small pannier tanks strapped onto the cockpit sides and the main tank in the tail, with the body spreading out the full width of the car between the wheels and having the exhaust pipes inside these hollow side pieces, and ending in four megaphones on each side. Opposed to this powerful team were three works Maseratis, to be driven by Moss, Behra and Perdisa, these all being normal carburetter 250/F1 models. Gordini entered two of his eight-cylinder cars, with Manson and Pilette as drivers, and the rest of the field was made up by private owners and private Scuderias. The Centro-Sud team entered Schell on their Maserati and Scarlatti with their old 2-litre Ferrari, while Maglioli had the Scuderia Guastalla Maserati and Villoresi was to drive Piotti's similar car. Rosier, Gould, Halford, Salvadori, Godia and Volonterio were all driving their regular Maseratis, so that the bulk of the entry of 19 cars emanated from Modena.

There were three practice periods, all of sufficient length for new drivers to learn the difficult circuit, but on each occasion it was either raining, or the track was still damp, so that no one was able to go at all fast by comparison with the possibilities of the cars. Ferraris were having some engine bothers, and had to use the spare units they had brought along, while de Portago could not understand his slow lap times until he discovered that the back of the chassis frame was broken off. This entailed stripping all the cars for inspection and welding gusset plates around the shock-absorber mountings to prevent any further breakages. The Nürburgring is guaranteed to break up the best cars, and the Lancia/Ferraris were no exceptions, this being their first visit to the track. For a change the Maseratis were proving quite reliable and their only trouble was grounding at the bottom of some of the sharp dips, so that the front suspensions had to be set up to give more ground clearance.