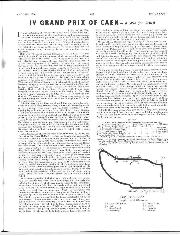 It was a refreshing to witness once more a small Formula I race containing none of the complications and pandemoniums of World Championship events, a race in which all the competitors were on equal terms. In European racing the meeting at Caen was the first Formula I event not in the World Championship to be held since the Naples race back in May, and that such an event was justified was shown by the interest of the race itself - and the 30,000 spectators who turned up in spite of appalling weather conditions.

Held over 70 laps of the 3.52- kilometre circuit, a field of 13 cars lined up in rows of two for the start, which was on a dry track but with rain clouds in the offing. The Friday practice had been dry and Salvadori and Rosier, with their maseratis, had both profited by their early appearance by making the front row; the second practice period, on the next day, was held in rainy conditions and no one could approach their times. Neither of these two drivers had an easy time in the first practice, for Hosier had an end come off a valve, which caused ruination of the cylinder head. piston and con-rod, and Salvadori broke his gearbox, which necessitated the mechanics working hard to rebuild it. However, both were rebuilt in time for the race, and behind them in the line up came Halford, (Maserati) and Manson (Gordini eight-cylinder), then Schell with the Maserati belonging to the Scuderia Centro-Sud and Gould (Maserati). In the fourth line were Simon (Gordini six-cylinder) and Lucas (driving Rosier's old four-cylinder Ferrari), with behind there Burgraff, an ex-motor-cyclist from Grenoble having his first drive in a six-cylinder Gordini, and da Silva Ramos in an eight-cylinder Gordini. To complete the field were Emery (Emeryson), Morice (Cooper-Bristol) and Pedini with the 2-litre four-cylinder Ferrari of the Centro-Sud team.