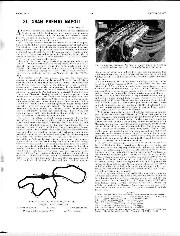 As in 1953 the arduous Circuit or Posillippo, on the outskirts of Naples, attracted the Continentals more than did the flat wastes of Buckinghamshire, and the Lancia and Maserati teams preferred to race in Southern Italy rather than in our own International Trophy meeting at Silverstone.

The Posillippo circuit is through the streets of a suburb of Naples, high up on the hillside overlooking the picturesque bay of that town. The 4.1 kilometres used for the circuit contain all manner of corners, steep gradients, both up and down, very little straight, and abound in natural hazards such as trees, kerbstones, concrete walls, drains and gutters, lamp-posts and so on; while the surface is such that a strong suspension system is most important. In fact, a “street race” in the true sense the the words.

The small, but select entry consisted of Ascari and Villoresi on Lancias, with Castellotti as reserve driver; Behra, Mieres and Musso with the factory Maseratis; Taraschi with his nicely rebuilt V12 Ferrari: Scarlatti with one of the old Formula II Ferraris, with 2.1-litre four-cylinder engine; Volonterio with an early Formula 1 Maserati, with 1/4-elliptic rear end; and Whiteaway with his H.W.M. AIta.

Two practice periods were allowed, but only the second one counted for starting times, and Behra and Mieres needed all this to learn the circuit, it being their first visit to Naples. The other three fast drivers were well versed in the difficulties of the seemingly never-ending corners and the steep gradients, having raced on the circuit in previous years. No factory Ferraris were present and the situation was similar to Pau last month — a straight battle between Lancia and Maserati. During the official practice period it was Ascari who set the pace, the Lancia not being changed from Pau and being the one used there by Villoresi, with the wide-spaced de Dion tube anchorages. Musso was in great form, seeming to like the difficult circuit, but he could not approach Ascari's times, while the other three were some way behind. The rest of the runners were naturally much slower, but the two Ferrari drivers showed almost equal ability on their very different cars. The H.W.M. was slow and had trouble with its ignition timing, while the private Maserati seemed to be coasting down the hills.