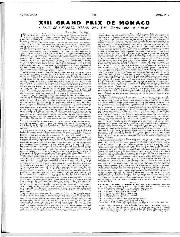 A Race of Surprises, Ferrari Win the Grand Prix of Europe

The town of Monte Carlo was reinstated as a racing circuit on May 22nd for the first time since 1952, and the meeting was given the title of the European Grand Prix. More important, however, was the fact that the Grand Prix of Monaco was the second round in the World Championship, and the first in Europe for 1955.

The anticipation of this first Grande Epreuve has made itself felt strongly throughout Europe for some weeks, and the entry proved to be one of the finest seen for many a year. It was the first 1955 appearance in Europe of the W196 Mercédès-Benz cars and in view of the fact that the Monaco circuit is a tortuous one the Stuttgart firm built two spceial cars for the race. These were shorter in the wheelbase than any previous models, and as a result there was no room for the inboard brakes at the front, so these were mounted normally, on the wheel hubs. At the same time this saved a great deal of weight, with the lack of drive shafts and universals; at the rear the brakes remained in the normal position. Other than this major alteration the two short-chassis cars were similar to the Argentine models, though the car given to Fangio had the engine mounted slightly farther forward, while the car Moss drove had it in the normal position, relative to the driver that is. Having no knowledge on the handling of these very short cars, the Mercédès-Benz engineers made the two cars slightly different in order to learn something. Their third entry was a long-chassis car with all four brakes inboard and in the hands of Herrmann, as Kling was not fully recovered from his Mille Miglia accident.

Gordini entered a team of three cars, Marmon and Pollet with the-earlier chassis models, but the former car now fitted with Messier disc brakes, and Bayol was on the only 1955 model. Then Rosier and Simon were down to compete with their private Maseratis and Macklin with the Maserati of Moss, disc brakes, Dunlop wheels and all. Two Vanwalls were entered, with Hawthorn and Wharton as drivers, while the Lancia team had four entries, the drivers being their regular three, Ascari, Villorresi and Castellotti, with the fourth car loaned to Chiron, for old-time's-sake. Four official Maseratis were in the hands of Behra, Mieres, Musso and the new boy Perdisa, and to complete the entry Ferrari had two Tipo 553 cars and, two Tipo 625 models, the drivers being Farina, Trintignant, Schell and "X." Finally, was the lone independent Whiteaway, with his H.W.M. and out or this formidable list of runners only twenty were going to be allowed to start, the choice resting with the organisers and obviously on practice times.