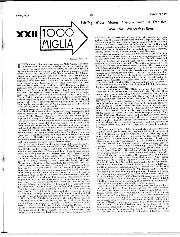 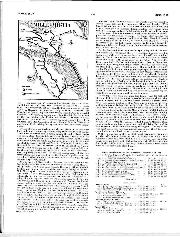 The fabulous Italian sports-car race, the Mille Miglia, took place over the weekend of April 30th-May 1st, but preparations for the event began many months before, not only amongst the big firms whose aim was an outright win, but also amongst all the various classes, for the XXII Mille Miglia contained 14 different classes, from diesel-engined cars and touring cars, through Gran Turismo groups to free-for-all sports categories, permitting thinly-disguised Grand Prix cars. Naturally, the main force for the outright winner comes from the Sports Class over 2,000 c.c., and Mercédès-Benz were testing their new 300SLR model in Italy as early as February, having already used the engine in their Formule Libre Grand Prix cars in the Argentine. The Ferrari factory had also used the Argentine races to try out their new six-cylinder 3,750-c.c. sports car and also had a resounding victory with it in the Tour of Sicily. Maserati raced their new 3-litre six-cylinder model, derived very directly from the Formula 1 car, in Sebring, Sicily and Dakar. These three firms were the main protagonists for the XXII Mille Miglia, and as the end of April approached activity around Italy became much more noticeable.

Italian drivers enter the Mille Miglia as a sort of tradition and they filled all the classes with every type of vehicle imaginable, and with an enormous German entry of diesel, 300SL, and the factory team of 300SLR Mercédès-Benz, Porsches, both standard and sports, together with a very large British entry, most of it of a sporting rather than serious nature, and numerous French cars in the smaller-engine capacity classes, a total of 652 entries was received. Not all of these presented themselves for the scrutineering and many of those that did had little intention of going very far round the course, but the tradition of the Mille Miglia is such that enthusiasts in and around Brescia are happy to enter and retire a few kilometres up the road, just to swell the numbers and enjoy the wonderful atmosphere of the start. Altogether 521 cars started in the race, leaving at one-minute intervals from the main road to the east out of Brescia, each car's number being its actual starting time.