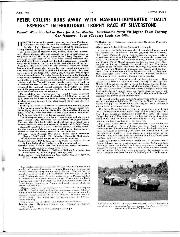 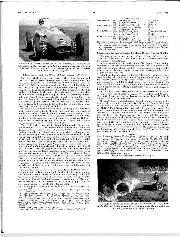 The great teams of Mercedes-Benz, Ferrari, Lancia and Maserati were absent, although this was certainly not due to indifference on the part of the B.R.D.C. or Mr. Asher of the "Daily Express." An aeroplane actually took-off for Italy when Ferrari intimated that two of the new Ferraris would race, but had to return empty when the entry was withdrawn. In fact, we do not think this marred the race. When two or three or all four of the big Continental teams are entered, loss of one will lessen the interest, but had Ferrari alone come to our shores with his cars they could but dominate the race. As it was, before K. D. Evans dropped the Union Jack, the big race was an open affair between the new Vanwalls, the new Connaughts, a Gordini and a range of older Maserati cars. Of these, Fairman ably showed the great merit of the new G.P. Connaught, holding third place for 27 laps before retiring, and the Vanwalls showed promise, only to succumb to mechanical failures, so that it was a thousand pities that Wharton re-entered the race and crashed seriously when victory was quite out of his grasp — the car was practically scrap and commiserations go to Tony Vanwall over this calamity.