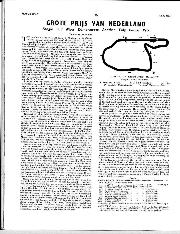 The surface of the pleasant little 4.193-kilometre Zandvoort circuit having been put into good shape, the K.N.A.C. were permitted to organise a Grand Prix to count for the World Championship this year. A select entry of 16 cars arrived for practice, notable withdrawals being the Lancia team and the Vanwall team, and in consequence Castellotti and Hawthorn were signed up by Ferrari, and they formed a trio with Trintignant as Farina was said to have retired. All three were using the new Tipo 555, now going very well, and they had an earlier Tipo 625 as a training car. Mercedes-Benz were out in force, with Fangio, Moss and Kling, having an assortment of cars to choose from, there being the two types of ultra-short Monte Carlo cars and two types of medium-length cars, one with front brakes inboard and the other with them outboard. Three factory Maseratis, unchanged from Spa, were in the hands of Behra, Mieres and Musso, while Rosier had his private car, Gould was driving Bira's car and Walker was driving Moss' car. Another independent was Claes, using Rosier's old Ferrari, and the list was completed by the usual three Gordinis with Manzon, Pollet and da Silva Ramos.

Practice officially began on Friday afternoon but that morning Mercedes-Benz booked the track privately and tried out their various cars, so that after lunch they were well prepared. The Ferraris were behaving themselves, though they had the wrong axle ratios and hurriedly dismantled the rear end and changed the ratio, after which they went well. Maseratis seemed well prepared, both Mieres and Musso making good times, but Behra was content to feel his way round quietly, still suffering from his injured leg. Gordinis just had not got enough speed, but otherwise were contented enough, Walker was enjoying himself in a real Grand Prix car for a change, while Gould was finding out that there was more to Grand Prix racing than meets the eye. It was Moss who made fastest lap with 1 min. 40.4 sec., nearly 10 seconds faster than the old lap record, which was not surprising as it was held by a 2-litre Ferrari.