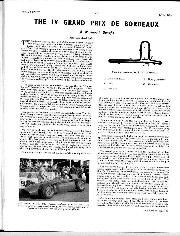 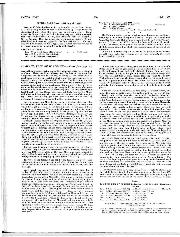 The Bordeaux race was the third of this season's smaller Grand Prix events, and once again the Maserati team were out in force, though this time opposed by Ferrari, instead of Lancia as at Pau. The Maserati factory team consisted of the trio, Behra, Mieres and Musso, driving the same cars they used at Pau, and they were supported by numerous private owners driving Maseratis. Mieres had the new cylinder head on his car, with the three 45DC0 Weber carburetters mounted on slightly-inclined inlet ports, the carburetter flange being separated from the head by a rubber block, while those on the 1955 head on Behra's car, now with equal-length intakes, were mounted rigidly. Musso still had the small-port head and 42-mm. carburetters, as did the private owners, who were Moss, Rosier, Bira and Simon. The British-owned Maserati had undergone many changes, as seen at Goodwood at Easter, but since, then the S.U. fuel-injection system had been removed and the engine fitted with the original Weber carburetters once more, though still retaining the "corners-by-Dunlop," which included the brakes, wheels and tyres.

The main opposition to the Maserati team were the two "Super-Squalo" Ferraris to be driven by Farina and Trintignant. These were unchanged in any major aspect from the one that appeared briefly at Turin, and the Ferrari team were rapidly gaining confidence in these new cars, for this time they did not bring any of the earlier models as spares. These two rather ugly new models, designated the Tipo 555, were identical but for one detail, this being the steering box, which was mounted on the right of the frame on Farina's car and on the left of the frame on Trintignant's car, with the steering column running along the respective side of the engine and coupled to the steering wheel by universal joints.