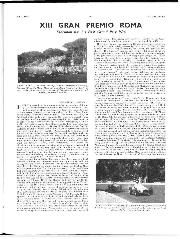 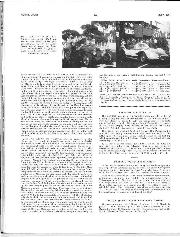 Every weekend in the summer months the populace of Rome go to the Mediterranean coast to the holiday resort of Ostia, and as most of them use their own transport, from Aurelias to Lambrettas, there exist two roads that run direct from Rome to the coast, a distance of some 12 miles. Not content with this, the Italian authorities built a new highway that runs in a straight line, in true Roman fashion, across virgin countryside, and this is a modern double-track road that finishes up in a vast carriageway with six traffic lanes, but no centre strip, that forms the last three miles into Ostia, onto the promenade. It is part of this six-lane road that the Automobile Club of Rome used as a basis for an entirely new circuit that was completed last month. Approximately 2 kilometres of the magnificent highway was used for the main straight, with the start and finish area situated half-way along it, the course then turning right just before the promenade along e new wide road, right again up an existing tree-lined avenue to a series of very fast right and left-hand curves past Castelfusano, from which the circuit takes it name, along a short straight and round a fast banked curve onto the main highway again, the complete lap measuring 6.950 kilometres. In many ways this new circuit resembles the pre-war Tripoli one, for it is flat and has only fast curves rather than corners, and before practice began it was pretty obvious that lap speeds were going to be well over 100 m.p.h.

Most unusual for an Italian Formula I race, there were no official Ferraris running and Maserati seized the opportunity and put in everything they had. There were four 1954 cars running, three red ones driven by Marimon, Mantovani and Musso, and Stirling Moss with his green one, fresh from his Aintree victory. Schell and Mieres had their privately-owned cars, the 1953 chassis with 1954 engine, and de Riu had a rather rough-looking 2-litre 1952 model. There were two Gordini 2 1/2-litre cars, driven by Behra and Simon, being the two cars that had run at Bari two weeks earlier, Behra's Aintree car going to Chimay. Rozier and Manton had their private 2 1/2-litre Ferraris and they were the mainstay of the opposition from Ferrari. There were also three locals none of whom had had any Grand Prix experience and seemed only interested in posing as racing drivers. They all had Ferraris, Serena having Whitehead's original short-chassis, swing-axle car with, a 2-litre V12 engine: Carlo Mancini had a 1950 Formula II car, and Guido Mancini a 1953 Formula II four-cylinder, but all three were in bad trim and had obviouslv not been raced for some time. A fourth local was Taraschi with a super-charged 750-c.c. Giaur, that was well turned out and looked like a toy alongside the 2 1/2-litres, it had a four-cvlinder Giaur engine, developed from Fiat, with a Roots-type supercharger on the front of the crankshaft and a huge Weber carburetters. A Tubular chassis carried Fiat-type front suspension and a one-piece rear axle suspended on coil spring. The driving seat was set to the left of the transmission and the whole car was nicely proportioned for a 750 c.c.