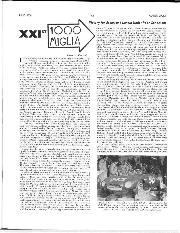 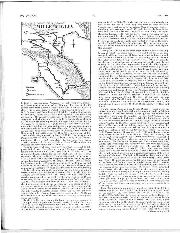 Victory for Ascari and Lancia under poor conditions

For a whole week before the XXlst Mille Miglia Northern Italy was under a continuous deluge of rain and some of the enthusiasm in Brescia was lacking a little but, having seen a Mille Miglia under perfect conditions, this slight lessening in the tumult made life easier. With an entry of 475 cars, ranging from 2 c.v. Citroëns to 4.9-litre Ferraris, it can be appreciated that competition in the various classes was enormous. Naturally, the battle for the Franco Mazzotti Cup, the prize for the outright winner, was confined to the sports class for cars over 2.000 c.c., and this year the chief protagonists were Ferrari and Lancia. Both factories threw in all they had, the Rampant Horse being upheld by Farina, Gianni Marzotto, Paulo Marzotto and Maglioli, all with open two-seater 4.9-litre Ferraris. This year, for the first time in the Mille Miglia, any sports car over 750 c.c. capacity was not obliged to carry a passenger, but of the big Ferraris only Maglioli went solo, his car having a fairing over the passenger's seat and a large streamlined headrest behind his own seat. There was also a curious multitude of aero-screens and wind-deflectors, and his car looked far more purposeful than many Grand Prix cars. Piero Scotti was lent an open two-seater 4 1/2-litre Ferrari by the factory and Biondetti had a similar 3-litre. The Lancia team consisted of four 3.3-litre cars, similar to those used in the Pan-American and the recent Sebring race; all were running without passengers, and also looked very fine Grand Prix cars. They were driven by Ascari, Taruffi, Castellotti and Valenzano, while a fifth car was brought along to the scrutineering on the Friday before the race. This one should have been driven by Villoresi, but he was still insufficiently recovered from the accident he met with during some practising when his mechanic was driving. Although the whole Lancia team were running as single-seaters they still had to have provision for carrying a passenger and at the scrutineering Renzo Castegnato, the organiser, insisted on seeing a car with the cockpit cover removed and a mechanic and driver sitting in the car. It was perfectly satisfactory and, amid cheers and laughter, he clasped young Gianni Lancia warmly by the hand and everyone was happy. In addition to the four open cars Lancias entered Piodi and Anselmi with special 2 1/2-litre Aurelias, the former in one of the red cars used last year at Monza and the latter with a blue and cream one as used by Claes to win the Liège-Rome-Liège Rally.