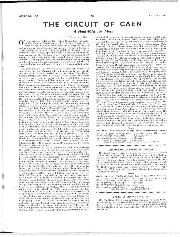 A Near-Miss for Moss

On the weekend following the British Grand Prix the Automobile Club de l'Ouest, organised a Formula 1 race in the town of Caen, a town whose Mayor is one of those enthusiastic and helpful men who appreciate that the way to attract a big crowd to your motor-race is to have it in the middle of the town. In the Centre of Caen is a large, open, grass-covered space on which horse-races are run, as well as being a form of park for the public, and it was on the public roads round this grassland that the Caen race was organised. The lap measured 3.523 kilometres and was completely flat, but it contained right-angle corners, an ess-bend, full-throttle curves and a hairpin, and contrived to produce a reasonably fast lap speed.

The entry was limited to ten drivers and of these only Mieres was a non-starter, his new Maserati still not being ready and his old one not rebuilt since it crashed on the way home from Reims. Gordini entered three cars, his complete team in fact, with Behra on the five-speed gearbox model, and Bucci and Pollet with the normal models. Rosier and Manzon both had their private four-cylinder Ferraris and Moss, Bira and Schell had their own Maseratis. With Gonzalez and Hawthorn competing in Portugal, Trintignant was alone to defend the Ferrari name and he was using the, 1953-54 model that Gonzalez had used to win the British Grand Prix. Two practice periods were allowed, the first early on Friday morning and the second late on Saturday afternoon, with the result that the mechanics had plenty of time to prepare the cars, but for any that ran into trouble at the second practice it meant some hurried work late into the night. This was slightly offset by the race itself being run late on Sunday afternoon, for the morning and early afternoon were occupied by a motor-cycle race and two rather drawn out races for Rene Bonnet's Monomill "circus.'"