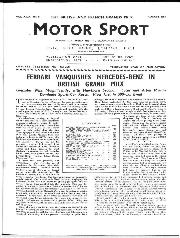 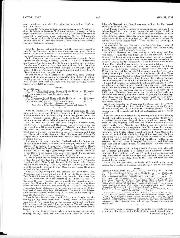 The British G.P., organised by the B.R.D.C. for the R.A.C. and run at Silverstone on July 17th, was the most interesting race we have seen since the war. A big crowd, said to be 90,000, braved the rain to watch a grim battle, over 270 slippery miles, between Ferrari, Mercedes-Benz, Maserati and Gordini, with the usual supporting entry of F. II Connaughts and Cooper-Bristols, a 2 1/2-litre Cooper-Alta and the 2 1/2-litre Vanwall Special; a total field of thirty-one.

Mercedes-Benz., arriving in England for the first time since their sensational appearance (although beaten by Auto-Union) at Donington in 1937, were fresh from Victory at Reims on their initial entry in G.P. racing since the war. Their equipage of vast lorries and workshop van, private Mercedes-Benz cars including a beautiful 300SL coupe, with Neubauer and Uhlenhaut in attendance, was impressive. Ferrari was out for revenge. Maserati had secured from Lancia the services of World Champion Ascari and Luigi Villoresi to assist Marimon to demonstrate their recently-found speed, with private owners supporting them. Gordini fielded Behra, Pilette and Bucci.

A great race was promised, and materialised. The Mercedes proved unsuitable for Silverstone, with their aerodynamic bodies. Gonzalez, driving faultlessly, led all the way for Ferrari on an impeccable non-stop run. He finished as unruffled as if he had been down to Brackley and back. Hawthorn came home an enormously popular second after a duel with Moss' Maserati, displaying the hall-mark of the true G.P. driver by obeying pit-signals and not over-revving as Moss vanished into the rain-mist. Moss had disgusting luck when a recurrence of back axle trouble retired his car ten laps from the end from an absolutely unassailable second place. Marimon finished third for Maserati after a very fine drive, his driving in the rain, which fell for the second half of the 90-lap race, being masterful. Fangio could do no better for Mercedes than fifth, his car dented where be had misjudged the corners due to poor driver-visibility, and troubled by fumes and a gearbox defect. Kling was very slow in the rain, left the course in a slide early on, and was as low as seventh.