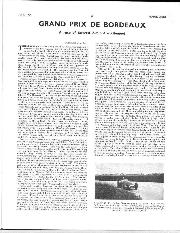 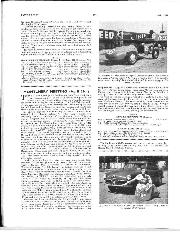 A race of interest but not excitement

The third Grand Prix to take place at Bordeaux was particularly memorable for two reasons. First it caused the abandonment of the Naples Grand Prix which was due to he run on the same day, and secondly the entry was first-class and yet there was not one Italian driver in the race. Almost everyone who is currently in the smaller Grand Prix events entered for Bordeaux and the Naples race received only the entry of Marimon (Maserati) and an X (Ferrari), which was thought to be Gonzalez. After Farina's crash in the Mille Miglia the X was withdrawn and Gonzalez appeared on the entry list for Bordeaux, so only four days before it was due the Naples event was cancelled. The Bordeaux meeting thus took on a greater importance than was expected, and chief interest was a return match between Ferrari and Gordini on a small twisty circuit that favoured the French cars as the Pau circuit had done.

Ferrari entered Gonzalez and Trintignant on 1953 chassis 2-litre cars and they were supported by Rosier and Manzon with their private models of the same type. Gordini entered Behra, Bayol and a new driver, Pollet, on his usual six-cylinder car, all with anti-roll bars back and front; Behra and Bayol's car having the new type of cockpit fairing. A fourth Gordoni six-cylinder was entered by Berger, being the yellow Belgian-owned car shared by him and Pilette. The Maserati factory are not yet running an official Grand Prix team, but they are giving the private owners factory support, Schell and Mieres being the two semi-official runners looked after by the factory organisation and personnel. These two were on the same car used at Pau and B. Bira had a similar model, while a fourth Maserati was in the hands of Stirling Moss. This was a brand new car, the latest to be built, with the multi-tube frame, longer wheelbase, de Dion rear axle and lower build. He had taken delivery of it, painted it his own personal green only a few days before, and this was to be his first race at the wheel of a thoroughbred racing car that was also the latest model. The four Maseratis made a vivid collection in the paddock, for they were all different colours, Schell's being pale blue, Mieres' dark blue with a yellow bonnet, Bira's a lighter blue down to hub level and from there downwards a rich yellow with yellow wheels, and Moss' a pale green. Looking rather lonely among these quartets was Whitehead's Cooper-Alta, now with 2 1/2-litre engine, Bristol gearbox, H.W.M. front brakes and drums, Rudge hubs and wire wheels all round and an early model Ferrari-type grille.