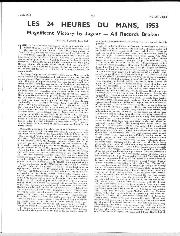 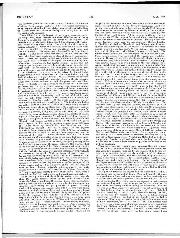 The Le Mans 24-hour race carries with it more tradition and history than any other event in the minds of most people and the occasion of the XXIst Grand Prix d’Endurance, on June 13th/14th, not only continued this position, but celebrated the 21st birthday by being the first occasion when over 100 m.p.h. has been averaged for the whole 24 hours. This wonderful achievement was recorded by A. P. R. Rolt and J. Duncan-Hamilton driving a factory-entered XK120C Jaguar and they averaged over 105½ m.p.h., thereby winning the special award for the first car to achieve more than 100 m.p.h. for the 24 hours. So fast was the pace set by the leaders that the first seven finishers all averaged over the 100 m.p.h. mark.

As always happens, the few weeks before the Le Mans event is full of rumour and speculation and performances in other races are always watched closely in order to judge the possibilities of a 24-hour win. This year, if anyone had suggested that Jaguars would have swept the board, with four cars starting and finishing in first, second, fourth and ninth positions, they would have been considered to be out of touch with current affairs, for it was well known that the Coventry firm were competing with the same models they used in 1951, whereas everyone else was preparing special new models.. Right up to the first evening's practice there was never a suggestion that the Jaguars had a hope of winning, unless everyone else blew up, but when Moss began to put in some laps at 4 min. 32 sec., comfortably as fast as any of the opposition, it was time to think again. At 4 p.m. on Saturday, June 13th, it was still not certain that they could hope to be in the running, unless the opposition fought against each other so furiously as to blow each other up, but 24 hours later it was a different story. Jaguars had set the pace from the fall of the flag, had held the pace for the whole 24 hours and had command of the race at a speed never before realised, which caused all but two of the opposition to retire or drop right back. The Coventry firm had achieved the impossible not by reason of luck or chance, but by winning the fiercest battle ever fought on the Sarthe circuit.