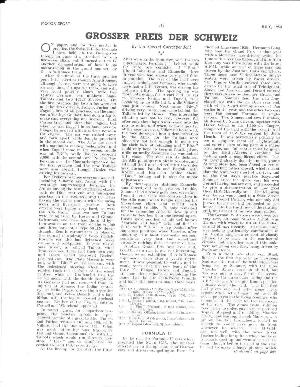 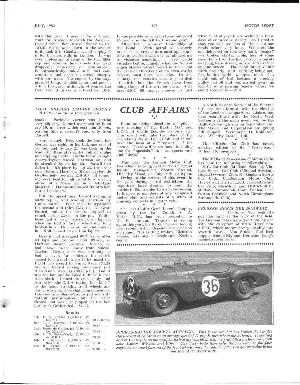 On paper, and for that matter in practice, the Swiss G.P. for Formula 1 cars, held on the Bremgarten Circuit on June 4th, promised to be a first-class affair, but it turned out to be another demonstration of how to go motor-raeing in the grand manner, by the Alfa-Romeo

After the finish of the three practice periods it looked as though Alfa-Romeos, although fastest, were not going to have an easy time, for against them, and with very good practice times, were two 1 1/2-litre Ferraris, two unblown Lago-Talbots and two 4CLT Maseratis. On the first practice day two Alfas were out and the three drivers, Fangio, Farina and Fagioli, first of all practised on the same car, after Ing. Guidotti had done a lap to make sure everything was in order. First Farina tried and after that Fagioli, but when he was flagged in to hand over to Fangio he arrived with a serious noise in the engine. The car was rushed away and torn apart while Fangio practised in the second car. The Alfas are fitted with maximum reading tachometers and when Fagioli came in the second needle was at 7,700, while Fangio recorded 8,000 with the second car.

Neither the Ferraris nor the Maseratis appeared for the first practice and the new Talbots were also absent, thought Rosier was driving his own car.

For Friday's practice everyone was out, including Villoresi and Aseari with the two-stage supercharged Ferraris, the former having the new lengthened chassis with de Dionn rear end and four-speed gearbox on the back axle and the latter having the earlier chassis with the swing axles and live-speed gearbox. Both drivers were trying very hard, as were the Alfa team. The two new Talbots were being tried by Rosier and Giraud-Cabantous, and these had the dual ignition system on the front of the engine and three horizontal Type 50 HN downdraught Zenith carburetters in place of the normal downdraught Solex models. Rosier's car also had lightened brake drums and backplates.