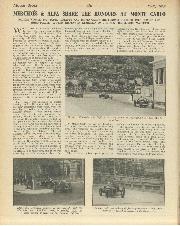 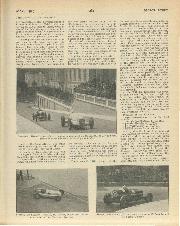 Fagioli wins at 58.17 m.p.h. Dreyfus and Brivio carry the Ferrari colours into second and third places. A fiery display by Etancelin on the new six-cylinder Maserati.

What better event could one have to open the racing season than the Grand Prix de Monaco ? The crowds, the noise, the cars in close proximity, all these factors combine to produce an atmosphere which is unique, and which brings racing enthusiasts together from all parts of Europe. After five months of hibernation the sport is once more in full swing, familiar cars and drivers again take the course, while new types often make their first appearance on this hardest of testing grounds.

Fagioli’s success in the Grand Prix de Monaco was no surprise to those who had seen the German cars in action. After the terrific laps set up in practise by Caracciola and von Brauchitsch these two drivers were also expected to figure prominently in the final order, but fate decided otherwise. Caracciola was beaten in fair fight, while Brauchitsch was eliminated right at the start, and as for the two drivers of the Alfas which were second and third, Dreyfus has already revealed himself as a pilot of the highest class, and Brivio's unhurried skill at Monaco shows that he is a force to be reckoned with in the races which are to follow.