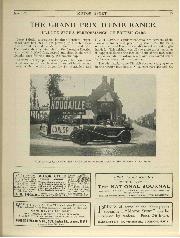 Great Britain, represented by three Bentleys, experienced very bad luck in not putting up a better show in this event, held at Le Mans on June 12th and 13th. The results show a triumph for the Lorraine-Dietrich team which finished first, second and third in the third biennial race for the Rudge-Whitworth cup.

All three Bentleys performed very well, but two experienced mechanical trouble after 12 and 18 hours respectively, while the third driven by Dr. Benjafield and S. C. H. Davis, in a gallant endeavour to beat one of the Lorraines for second place, dug itself into the bank on a corner, and Davis was unable to extricate it singlehanded. This mishap was all the more unfortunate, as it happened during the last half-hour of the race when success was almost within reach, and was caused solely by brakes being out of adjustment.

The winning Lorraine-Dietrich covered 1,585.99 miles in the twenty-four hours. O.M. cars were 4th and 5th.